A Spotlight on Wildlife 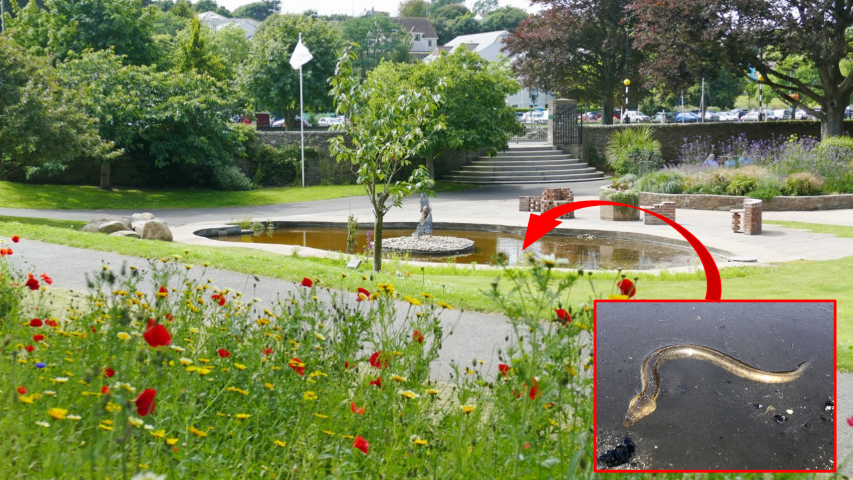 European eels found
in the Memorial Recreation Ground Pond
Once a year the brackish pond in the Memorial Recreation Ground is emptied for cleaning as there is no natural flushing of the pond apart from surface rain water draining in from the area immediately around it and seawater exchange from the Kingsbridge Eastury. It is probable that the eels find there way into the pond on the high tides that bring sea water into the pond.
Eels have been noticed in previous years, but during the draining and cleaning of the pond by the council in June 2018 we were amazed to see dozens of eels in sizes from very small to more mature specimens some 40cm long.
We believe they are European eels, a critically endangered species.
Eels are are still a mystery in regards to their migration and breeding processes.
Aristotle thought they came from earthworms. Others thought they spontaneously generated. To this day scientists are still searching to understand the mysterious eels' life cycle and migration habits.
The Story so far!
​Over the past century, a consensus has formed that American and European eels journey thousands of kilometres across the ocean to spawn in the conducive conditions of the Sargasso sea. In this vast, self-contained gyre of water in the western Atlantic, near Bermuda, the water is warmer and saltier than the surroundings. The newly spawned elvers then make their way home.

But this extraordinary mission is a matter entirely of inference, first drawn by Danish researcher Johannes Schmidt after a series of expeditions to the Sargasso a century ago. No adult eels have ever been caught spawning there. Until recently, none had even been seen en route. “Their migration remains a complete mystery,” says Melanie Beguer-Pon of Laval University in Quebec. Yet there must be something to the Sargasso tale, says Håkan Wickström of the Institute of Freshwater Research in Drottningholm, Sweden. “They must spawn there because the tiniest eel larvae are found there,” he says.
And so the story goes: on the brink of sexual maturity, eels leave the shores of Europe or North America for the depths of the Sargasso sea, where they engage in panmixia, a wriggling orgy of individuals randomly mating with each other. The resulting larvae mature into transparent “glass” eels as they make the return journey to spend their lives in river estuaries on their respective continents.